This issue went on sale on time.
This issue has variants: 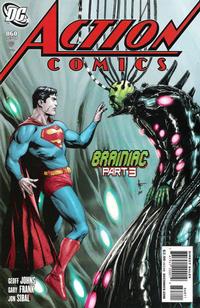 Genre
superhero
Characters
Superman; Brainiac; Supergirl [Kara Zor-El]; Catherine Grant; Lois Lane; Ultra the Multi-Alien (cameo); Koko; Jonathan Kent; Martha Kent; Steve Lombard (cameo); Ron Troupe (cameo)
Synopsis
Supergirl visits the Daily Planet, looking for Clark, but making an enemy of Cat Grant in the meantime. Superman is still unconscious on Brainiac's ship, being probed. After awakening and destroying the Brainiac probes, he explores the ship, fighting Kono, finding various people (including Ultra) in suspended animation, finding a room of bottled cities, and hearing Kryptonese. He tracks the latter to a particular city in a bottle: Kandor. The real Brainiac awakens, and they confront each other. Brainiac has traced Superman back to Earth, which he now plans to gather knowledge from.
Reprints
Keywords
Brainiac Probe; Headship; Kandor