This issue went on sale one week late from the solicited shipping date of this issue. DC announced in a press release on 2008-09-09 that this book would be late due to a "printing error". When it did ship, the cover was slightly different than the solicited cover; instead of holding bottles labeled Beer, Clark and Jonathan were now holding bottles labeled "Soda Pop". Apparently, that was the reason for the delay, as some copies have surfaced from the original printing that still had the beer bottles on them.
This issue has variants: 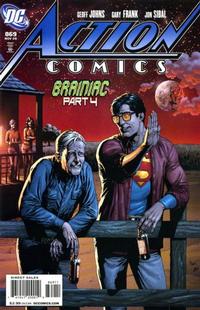 Genre
superhero
Characters
Superman; Brainiac; Supergirl [Kara Zor-El]; Lois Lane; Catherine Grant; Jimmy Olsen (cameo); Steve Lombard; Ron Troupe; Brainiac Probe; Zor-El; Alura; Jonathan Kent (cameo); Martha Kent (cameo)
Synopsis
Brainiac's probes arrive in Metropolis, and Supergirl and Lois confront them. On the ship Superman and Brainiac continue their confrontation, and Superman gains the upper hand, putting Brainiac temporarily out of commission. He then goes to get the Kandor bottle, which starts communicating with him. Supergirl's parents are alive in there, and tell how they and Argo City survived the initial destruction of Krypton using Brainiac's technology. But Brainiac tracked them down, destroying Argo City, which forced Zor-El and Alura to send Kara away to Earth in the moments before destruction. But Brainiac has recovered; he severs the communications link and recaptures Superman. Supergirl is also captured and brought to the ship. A bottle starts forming around Metropolis, and the ship then fires a weapon into the Earth's sun.
Reprints
Keywords
Argo City (flashback); Headship; Kandor