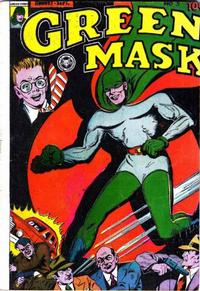 Genre
crime; superhero
Characters
Green Mask; Johnny Green; Mr. Green; Mrs. Green; Professor Battenburg; Mike O'Hara; Captain Halloran
Synopsis
When two of his classmates are arrested for participating in a wave of bank robberies, Johnny suspects their chemistry teacher, Professor Battenburg. Johnny investigates and becomes the Green Mask, discovering that Battenburg's compound "Brainol" is used to drug the students who are then used as fall guys for the real robbers. The Green Mask exposes Battenburg as the Master Cracksman, a criminal thought to be dead. Battenburg commits suicide after confessing.

In The Green Mask v1 #10 (August 1944), Johnny Green's father Walter is referred to as having been the original Green Mask but is said to be away at war. However, in this story Johnny refers to two adults as "Mom" and "Dad" but there's no indication his father (who only appears in one panel) is an ex-superhero (and it's Johnny who magically becomes the Green Mask).

When the Sky-Scrapers Danced! (Table of Contents: 5)

Genre
science fiction
Characters
Rick Evans; Astra; Xako; Stringbean; Professor Astra (father)
Synopsis
Evil space spider Xako intends to wipe out the population of Earth with "inter-planetary vibrations" so his race can inhabit it. Rick, Astra and Stringbean fly their rocket to confront Xako, who is burned to death when Rick flies through a comet.

next app. in ZOOT COMICS #8

In the last panel, Rick hopes for "a little peace and quite" [sic].

First Line of Dialogue or Text
'Ray's Sunbream' is an amazing fish...
Genre
non-fiction
Synopsis
Five illustrated factoids about a fish, aviation, the Dodo bird, Burmese cigarettes, and the "Day of the Animals" in Mexico.