Cover image is reprinted from unknown source. Editor Dez Skinn reports "using a blow-up of a Sal Buscema drawing" for this cover: https://dezskinn.com/Marvel-UK-3/ 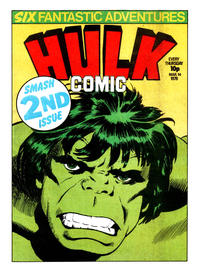 At end of this reprint, there is a note that The Black Knight Feature will return next week.

First Line of Dialogue or Text
Night-time in the city ...
Genre
detective-mystery

Chaos In Canada: Episode One (Table of Contents: 7)