The image from this cover was later used as the model for a statue. 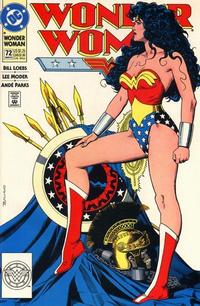 The Song of Creation (Table of Contents: 1)

First Lee Moder and Ande Parks on interior art; Moot and Geof are a tribute to "Mutt and Jeff," the long running comic serial.

Wonder Woman tells her origin with new facts: the Amazons were created not in Greece, but on Themyscira. Aphrodite is shown to be the main goddess of the Amazons. The Amazons, before inhabiting the island, were sent to live for 10 years in cities throughout Greece to learn about civilization.

After their exile, the Amazons return to Themyscira, where Heracles ventures in his attempt to steal Hippolyte's girdle.

When the seal to Tartarus is weakened, Diana Trevor arrives with 20th century weapons the Amazons use to fight the daemon horde. Diana flies her plane into the pit entrance, sacrificing her life to seal the pit. Hippolyte is given the life of the unborn child Diana Trevor was carrying, which is placed in the figure Hippolyte sculpts from clay.