This issue went on sale twelve weeks from the solicited shipping date of this issue. This edition features an upside-down logo, issue number, and credits written in Kryptonese, duplicating the information at the top in English.
This issue has variants: 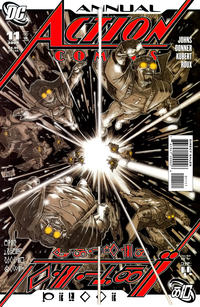 Genre
superhero
Characters
Superman; Lex Luthor; Superman Revenge Squad [Bizarro; Metallo; Parasite]; General Zod; Ursa; Chris Kent [Lor-Zod]; Non; Jax-Ur; Lois Lane; Martian Manhunter (cameo); Red Tornado (cameo); Wonder Woman (cameo); Supergirl [Kara Zor-El] (cameo); Green Lantern [Alan Scott] (cameo); Hawkgirl (cameo); Hawkman (cameo); Power Girl (cameo); Perry White (cameo); Jimmy Olsen (cameo); Jor-El (hologram); Mon-El (cameo)
Synopsis
Superman and the Revenge Squad discuss the Phantom Zone criminals' takeover of Metropolis. Meanwhile the army attacks the criminals. Zod captures their leader, and wants to use him to pass along a message, that Zod will kill anyone that doesn't immediately obey him, starting with his own son, Lor-Zod (Chris) right now. But before he can, Superman rescues Chris, and the fight is on. The squad takes out several of the criminals, while Superman fights Zod. Luthor sneaks into their headquarters, killing a criminal, and starts working on one of the Phantom Zone ships. Superman rescues Lois and the captured heroes, and continues to fight Zod, but Chris intervenes. Luthor reverses the warp drive on the ship to draw the criminals back to the zone, but before he can set it to take Superman too, Lois crowns him hard. The criminals are drawn back, as is Chris, but Superman hangs onto him. The zone won't close, though, so Chris sacrifices himself to close the zone. Later, Superman has Mon-El search the zone, but Mon-El can't find Chris.
Reprints
Keywords
Fortress of Solitude; Phantom Zone