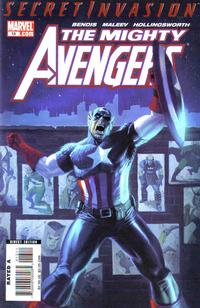 First Line of Dialogue or Text
Hey... You know, you remind me of someone.
Genre
superhero
Characters
Nick Fury; Daisy Johnson; Phobos (son of Ares); Yo Yo Rodriguez (daughter of the Griffin); J.T. (grandson of Phantom Rider); The Druid (son of Dr. Druid); Jerry Sledge; Ares (cameo); Layla Miller (cameo)
Synopsis
Nick Fury gets former S.H.I.E.L.D. agent Daisy Johnson to travel the country recruiting the next generation of super heroes for his fight against the Skrulls.
Reprints
Keywords
S.H.I.E.L.D.

In-Joke alert: Nick Fury appears to Daisy at the beginning of the story as a bald African American man with an eyepatch--much as he appears in the Marvel Ultimate Universe as created by Bendis. At the end of their conversation, Daisy says, "By the way, that is the worst disguise ever, Nick."