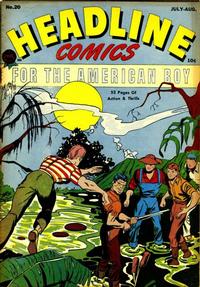 First Line of Dialogue or Text
Reckon the lads are on this train, sheriff!
Characters
Junior Rangers

Art is consistent with Kane’s Wildcat art signed under “Gil Stack” from Sensation Comics #70-72 (1947), including his tall and burly characters with lanky arms and the antihelix of the ear drawn as a crescent shape. Previous indexer tentatively credited Henry Kiefer.

The Affair of the Bogus Bills (Table of Contents: 2)

First Line of Dialogue or Text
Well, here we are in the wild west where men are men
Genre
adventure; aviation
Characters
Buck Saunders

Beast of Prey (Table of Contents: 6)

First Line of Dialogue or Text
The lush green jungles of Venezuela have been slowly pushed back, but on against the stubborn resistance of Nature at her wildest.
Genre
detective-mystery
Characters
Jose Amorta (chief of detectives)

First Line of Dialogue or Text
An assassin's bullet strikes down a leading Latin-American liberal...
Genre
superhero
Characters
Atomic Man [Adam Mann]; Dr. Mendez; Dr. Fletcher; Group of Fascists [Ramon; others un-named] (villains)
Synopsis
A group of Fascists in a South American town seriously wound a doctor who, they believe, is selling them out to the Americans. Atomic Man stops an assault on a power plant providing the power to the hospital where Dr. Mendez is being operated on.
Reprints