First Line of Dialogue or Text
You are about to experience the most tragic day in the life of Wally West!
Genre
superhero
Characters
Flash [Wally West]
Reprints 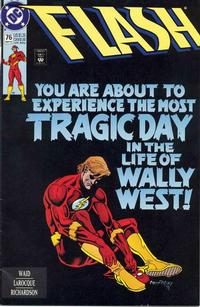 The Broome building is an homage to classic Silver Age Flash writer John Broome. Jay and Johnny mention other names Max Mercury has worked under: Lightning, Blue Streak, and Quicksilver. Jay also mentions a case he worked on with Max in 1949 involving "The Screaming Skull."