Indexed from scanned copy that appears to be missing inside back cover (possibly blank?).

The House That Crime Built (Table of Contents)

Cover is from first page of story in Pep Comics #49. Artwork is signed in the original but signatures have been eliminated from this reprinting. 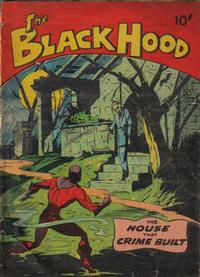 The House That Crime Built (Table of Contents: 2)

Genre
superhero
Characters
Mary Hawkins (Introduction, Villain, Death); The Black Hood
Synopsis
Narrated by "the house that crime built", this is the story of Black Hood solving a crime at a house built in 1821 with a history of crimes being committed in it.
Reprints

Archie Is Good for What Ails You! (Table of Contents: 3) (Expand) /

[Aboard the NARCISSUS] ["But But -- I can explain everything, Mr. Weatherbee, honest!"] (Table of Contents: 4)

Artwork is signed in original printing but signatures have been eliminated for this reprint.

First Line of Dialogue or Text
I'm Jim Crow, hello!
Genre
non-fiction
Synopsis
Three fun facts about animals as submitted by readers. Address says to submit to "Catfish Joe", so presumably this was a sub-feature of that strip.
Reprints

When reprinted in Black Hood, all the addresses of the kids who submitted the stories were changed to Canadian cities to make it seem more home-grown. 160 West Broadway New York, New York (the address to send letters to was changed to 160 West 21st Street, Calgary.

Tales of a Safety Pin (Table of Contents: 7)

In the reprint, The Shield's costume has been changed from stars and stripes to a Union Jack.

First Line of Dialogue or Text
Our little friend, here, was playing cops and robbers...
Synopsis
A maze with a copy of Super Comics at the center, a man holding a sign with scrambled letters and how to draw a face.
Reprints

Name of comic in the puzzle page has been changed from Pep to Super (since Pep was not published by F.E. Howard).

Genre
humour; historical
Characters
The Medusa (Introduction, villain); Snooch; Marco Loco
Synopsis
Marco Loco and Snooch are hypnotised by the Medusa but then capture her and take her to the King to collect a reward.
Reprints

Artwork is signed in original printing but signatures have been eliminated for this reprint. The last panel in the original has a "coming next issue" box that has been eliminated in the reprint.

Synopsis
Four trick questions and answers including how to tell the left bank of a river from the right bank.
Reprints

Title block in the original states "By Ed Goggin", but has been relettered in reprint to be "By Chuck Purvis". No other evidence of Chuck Purvis working in comics. Speculation that he re-lettered and redrew any pages that needed to be worked on for this reprint.

Artwork is signed in original printing but signatures have been eliminated for this reprint. First panel taken from another story to replace first panel of this one. No obvious reason why the publisher would have done this.
Earlier indexer felt this was written by Theresa Woik [Szenics]. She is not known to have written any comics, but is known for inking and lettering.