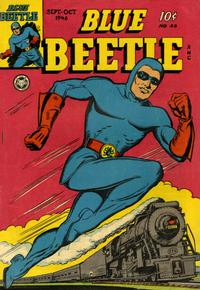 Genre
superhero
Characters
Blue Beetle [Dan Garret]; Mike Mannigan; Joan Mason; Reardon (villain, introduction); Colini (villain, introduction)
Synopsis
The city is taking on a campaign against juvenile delingquency. But a crooked furrier hires a bunch of school kids to rob his warehouse so he can collect the insurance.
Reprints

Solution by Cupid (Table of Contents: 3)

last app. in THE BOOK OF COMICS #1

Statue of Doom! (Table of Contents: 5)

Genre
superhero
Characters
Bronze Man [Major Randy Ronald]; Judge Buzz Smith (Rand's father); Rand Ronald Smith, Jr.; Bull Gambos (villain); Gambo's gang (villains, all die?)
Synopsis
Randy gets off the train and spots a statue named after him in appreciation for saving the life of the local judge years back, and he visits the courtroom where the judge is sentencing a criminal to prison. While seated there, Randy overhears a threat to the judge's life and tries to follow the plotters, but instead sees the judge's son kidnapped. He discovers that the statue is loaded with explosives, timed to go off during a citizen's committee speech to be given by the judge.
Reprints
Keywords
kidnapping; statues; time bombs; waterfalls

Next appearance in Jo-Jo Comics #7.

Alec Hope is a pen name for Bronze Man creator/artist, Alvin C. Hollingsworth, and appeared on the strips that Hollingsworth drew (courtesy of the Who's Who).