Visions of Death! (Table of Contents) 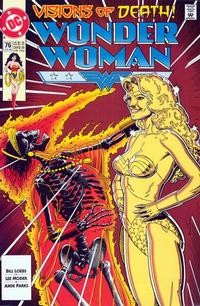 Hoppy notes she was named after Hopalong Cassidy. Queen Hippolyte can administer the "Queen's Peace," by which she heals disputes by force of will. Circe is said to have lived for 7 thousand years. Diana suggests she might have killed Circe for her actions against the Amazons.

A blurb at the beginning mentions the "Perez Complex," concerning readers who can't get over the changes to the title since Messner-Loebs became writer.