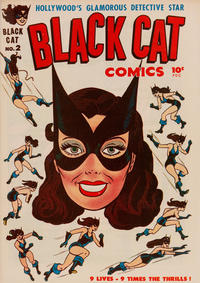 Who Is the Black Cat? (Table of Contents: 1)

The Rampaging Reporters! (Table of Contents: 3)

The Death Move (Table of Contents: 5)

The attributed Inker credit for this was found on the check-off box stamp in the margin of the original art for Page 6. It shows that the inks were assigned to "AWS". Not sure who that would be, but it's a clue.