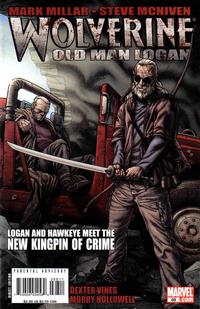 Credits, recap and a map of the journey.

Genre
superhero
Characters
Old Man Logan; Clint Barton [Hawkeye] (guest); Tonya (guest); Ultron 8 (guest); Spider-Girl [Ashley] (guest); Daredevil [unnamed] (guest, death); Punisher [unnamed] (guest, death); Kingpin [unnamed] (villain, death)
Synopsis
Logan and Clint take off for Salt Lake City to save Clint's daughter from the new Kingpin. Logan refuses to do any more than drive the car as Hawkeye cuts through the Kingpin's men and rescues his daughter. Ashley kills the Kingpin and decides to become the Kingpin herself, turning on dear old dad. In order to save his friend, Logan is going to have to forsake his pacifistic ways and resort to a little mutant mayhem.
Reprints