Numerous corrections and additions of credits and reprint info for this issue from Darrel McCann, November 2007. 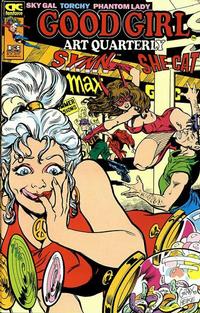 First Line of Dialogue or Text
What? You can't be serious, Gordon?!
Genre
superhero
Characters
She-Cat; Synn; Gordon; John; Dan
Synopsis
She-Cat ends up having to take Synn to the mall where she manages to foil a pair of shoplifters who have a gun.

'Warrior' is a character from the VHS video tutorial/short-film bundled with DragonStrike (board game released in 1993).

First Line of Dialogue or Text
In previous articles in Good Girl Art Quarterly we have dealt mainly with female characters who had their own books or series of stories.
Genre
non-fiction

Abstract
Within the realm of good girl art, Bill Black discusses classic comic strips with female characters who did not have their own books or series of stories.

Who Is Star Pirate? (Table of Contents: 5)

'Mascot' as it appears in print, suggests a media personality, similar to Milana Vayntrub playing 'the AT&T Girl Lily Adams' on television in 2013. It's unclear who filled the role of Crystal, the Wizard convention model in the 1993 era. If someone can find her identity please update this note and character list. Similarly, any character name of the Hero mascot is not known at this writing.