Trapped by Mayfly! (Table of Contents) 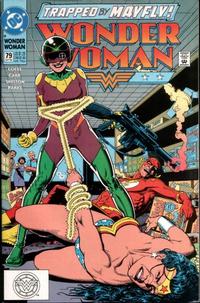 Taking the Spear (Table of Contents: 1)

Wonder Woman describes "taking the spear," a tactic devised by Hippolyte when Hercules' [sic] men invaded Themyscira: the Amazons would let down their guard to provoke a thrust from their opponent, bringing the men close enough for the kill. Wonder Woman is shot in defeating Mayfly. Donna Milton moves into Camille Sly's boarding house.