Title on Cover: Justice Society of America Kingdom Come Special: Superman. Also, number on cover, but not in indicia.
This issue has variants: 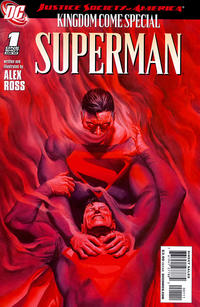 Superman (of Earth-22) visits a room in the JSA brownstone with statues of the Hector Hall Sandman, Spectre, Robin (in the Batman-inspired costume from Justice League of America (DC, 1960 series) #55), the android Hourman, the Jack Knight Starman, Sylvester Pemberton as the Star-Spangled Kid, Captain Marvel, the Terry Sloane Mr. Terrific, Al Pratt in his second Atom costume; headshots of several JSAers including Hippolyta as Wonder Woman, both the android Red Tornado and Ma Hunkel in costume, Dinah Drake Lance as Black Canary, Ted Knight as Starman; and a JSA portrait that looks like Murphy Anderson's pinup from Justice League of America (DC, 1960 series) #76.

In this article, Alex Ross describes the process of creating this special. Includes several pages at the pencil stage and two reference photos, which are reproduced in color.