Title on cover: Justice Society of America Kingdom Come Special: Magog. Also, number on cover, but not in indicia.
This issue has variants: 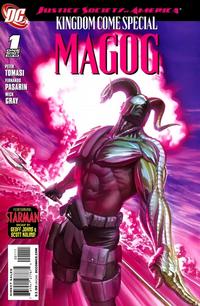 Thy Kingdom Come: Magog, the Real Me (Table of Contents: 1)

Genre
superhero
Characters
Justice Society of America [Magog [David Reid]; Judomaster [Sonia Sato]; Wildcat [Tommy Bronson]; Amazing-Man [Markus Clay]; Damage; Citizen Steel; Hawkman [Carter Hall]]; Gog; Mike Donovan; Captain Atom [Nathaniel Adam]; Anthony Martinez
Synopsis
When Magog hears a report of his old unit nearby in Africa, he leaves Gog and the JSAers walking with Gog towards Kahndaq. As he brutally completes his unit's mission, he recalls the incidents in his life that brought him to this point, including finding an artifact looted from the Baghdad Museum which burrowed into his skin and left him with energy powers. The mission complete, Magog rejoins Gog and his teammates on the march towards Kahndaq.
Reprints

On splash page: "Special thanks to Geoff Johns and Alex Ross."

The Secret Origin of Starman (Table of Contents: 2)

Genre
superhero
Characters
Legion of Super-Heroes [Starman [Thom Kallor]; Triplicate Girl; Saturn Girl; Colossal Boy; Brainiac 5; Dream Girl; Phantom Girl; Chameleon Boy; Element Lad; Light Lass; Superboy (edge of cape only); Dawnstar; Polar Boy; Wildfire]; Fryd Kallor; Mira Kallor; Kenz Nuhor; Brainiac 5 (of Earth-247); Koko (Brainiac 5 of Earth-247's pet); Brainiac 5 (of Earth-Prime)
Synopsis
As Starman cleans out his padded cell, he relates to his doctor how he gained his power due to being born on a space observatory, how he joined the Legion and met Dream Girl, but was expelled when he killed Kenz Nuhor in self-defense, and how years later he came to the present on a mysterious mission for the Legions of three worlds.
Reprints

It is not clear how much of the pre-Crisis Legion history happened to the "Lightning Saga" Legion, as it is implied in this story that Starman did not return to the Legion until recently, while in the original continuity he returned to the Legion soon after being expelled.