E.C. Stoner is credited with a number of other Green Mask covers in this period, and the artwork looks pretty much the same. 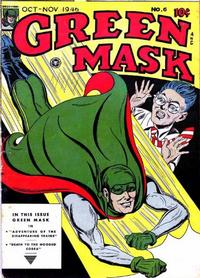 Adventure of the Disappearing Trains (Table of Contents: 2)

Genre
superhero
Characters
Johnny Green; The Green Mask
Synopsis
A train filled with clothing donated for refugees in Europe is wrecked and the donations stolen. Schoolboy Johnny, a passenger on the train, gets angry and becomes the Green Mask. The Green Mask tracks the stolen clothes to a phony charity organisation in New York and foils their plan.

The donated clothes are destined for the real-life UNRRA (United Nations Relief and Rehabilitation Administration).

First Line of Dialogue or Text
Well, I don't know...I sort of had my mind set on an admiral!
Genre
humor
Synopsis
5 gag cartoons.

No False Alarm (Table of Contents: 4)

Death to the Hooded Cobras (Table of Contents: 5)

First Line of Dialogue or Text
Hogan and his handlers invade South America...
Genre
sports
Characters
One Round Hogan; Spigot Barnett; Blimp; Pancho Avilla
Synopsis
Boxer Hogan, his manager Spigot and corner man Blimp sail to Brazil. Spigot is swindled by a gambler on board and loses 50% of Hogan's contract. Hogan offers to fight Brazilian champion Pancho, also a passenger, for charity: if he loses, the gambler owns Hogan's contract outright, but if Hogan wins, Spigot gets his share back. Hogan wins.
Keywords
boxing

One Round Hogan's next appearance is in ZOOT COMICS #8.

"Jo Logan" is the house byline for this feature, probably not a real person. Al Zere is credited with the art on another One Round Hogan story via a JVJ index card attached to the online scanned version of that issue. The art is consistent in virtually all stories featuring this character.

This story ends abruptly but since none of the stories in this issue has a "The End" in the final panel, presumably it is complete.