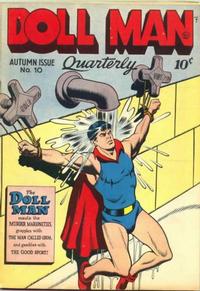 Originally credited to Al Bryant, but few of his many close up faces in side view or female heads with protuding forehead are seen. This is most probably by Elkan, with narrow eyes, abundance of hair on the head. Also the inking is much like his work.

Genre
superhero
Characters
Doll Man [Darrel Dane]; Martha Roberts; Luther; Grim (villain, introduction)
Synopsis
Mr. Grim tries to put Martha and her friend Luther into suspended animation coffins so that one hundred years in the future they can easily conquer the weaklings who would surely have proliferated by then.

Originally credited to Al Bryant, but the sharp hard lined faces are most probably by Celardo. Compare with his story in Boris Karloff Tales of Mystery #38. It is later than this, but his firm faces and figures are similar. He is credited on this feature by Jerry Bails' Who's Who.

The Riddle of the Missing Ears (Table of Contents: 3)

The art here looks more like Max Elkan than Crandall.

One Eye Gets His Man (Table of Contents: 4)

First Line of Dialogue or Text
Ha-ha! So you wanna be a riveter, eh?
Genre
humor
Characters
Poison Ivy; Riveter
Synopsis
Poison tries to be a riveter but bursts the girders when flattening the rivets.

The Good Sport! (Table of Contents: 6)

Originally credited to Al Bryant, but this is most probably Astarita. Especially the face on top of page 8 is exactly identical to ones found in his signed story in Real Life Comics #53. Also some faces in 3/4 backview with google eyes are similar. Compares well with his story in Jumbo Comics #51.

Alter Ego #141 (August 2016) has article by Hames Ware indicating that the art is by Astarita.