Publication date is based on copyright date and information available in other issues of the series. 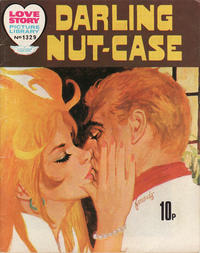 Genre
romance
Characters
Kathy 'Irish' Flanagan; Wesley Bates; Noah Aldwin; Cora Bayard; Sammy Wallace; Mr. Young
Synopsis
With the boss away, Kathy works hard to sell the advertising department on the idea of including a lucky number with every jumbo size packet of Nutty Nut-Crisps. And the one with the luckiest number would win an elephant or a cheque for five hundred pounds. She thinks they will get great publicity out of the idea, but never dreams that the winning nut-case would actually want the elephant instead of the money. She is sent to talk the winner into accepting the money instead of the elephant, but Kathy falls in love with the guy and can't bring herself to tell him the truth.
Reprints

Note at the bottom of the splash page states: "First published in 1970".

Genre
romance
Characters
Ward Baker; Anne
Synopsis
Despite his reputation for twenty-four hour affairs, girls just can't seem to resist Ward. Anne tells herself that she will be different, but has a hard time resisting him. When he asks her to come to his flat for some privacy, she thinks his old pattern is about to repeat with her.