This issue is Green Shield Continuity #12. It also features the "Faces of Evil" promotion of villains on the cover for March 2009 titles.
This issue has variants: 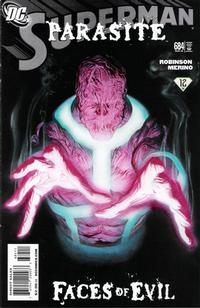 The Mind of Rudy Jones (Table of Contents: 1)

Genre
superhero
Characters
Superman; Parasite [Rudy Jones]; Mon-El; Science Police; The Guardian [Jim Harper clone]; Alura; Kryptonians; Flash [Jay Garrick] (cameo); Nightwing [Chris Kent] (cameo); Flamebird [Thara Ak-Var] (cameo); General Zod (cameo); Ursa (cameo); Non (cameo)
Synopsis
Superman releases Parasite from the Phantom Zone (having already released most the other Earth villains). Mon-El informs Superman that Bizarro is missing, as are Zod and his followers. Parasite reaches in and grabs Mon-El, absorbing some of his energy before being stopped by Superman. Parasite plays weak until he is left alone, and escapes, using up the last of the power he took from Mon-El. At Science Police headquarters, The Guardian introduces himself to his troops, even revealing his face and real identity. Superman visits New Krypton, and with Alura watches a parade in honor of the new planet. He tells her that Zod is missing, and she tells him she released Zod and has put him in charge of their army.
Reprints
Keywords
Kandor; Phantom Zone