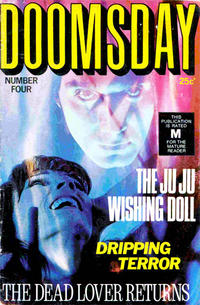 Genre
horror-suspense
Synopsis
Ted Femur dies in a boating accident, but pleads with the "high court of the dead" to return to the world of the living to look for the love of his life. He finds the girl who was meant for him. She doesn't see him as a rotting corpse and is willing to even marry him. But there's a catch...
Reprints

The Flaming Witness (Table of Contents: 2)

The Man Who Lost his Body (Table of Contents: 4)

Genre
horror-suspense
Synopsis
Baseball player Rick Demoine encounters the ghosts of former baseball heroes and steals their special abilities from them. Incorporating more and more ghostly traits, Rick Demoine himself turns into a spectral being.
Reprints

Genre
horror-suspense
Characters
Dr. Death
Synopsis
A pair of lovers on Haiti come into possession of a voodoo doll. Their careless handling of the powerful artefact will be their doom.
Reprints

The story is introduced by the (unnamed) Dr. Death, the horror-host from This Magazine is Haunted (Fawcett, 1951 series).

Genre
horror-suspense
Characters
The Mummy (Horror-Host)
Synopsis
Captain Enoch Claughton kills the native girl Mauna for a bag of pearls. He is haunted by her ghostly apparition for decades and finally claimed to join her in death.
Reprints

Anthony Cataldo is rumored to have worked for Fawcett’s "Whiz Comics" in the early 50s (drawing the “Golden Arrow” feature). Also a bottle on the table in the splash wears the label “AC”.