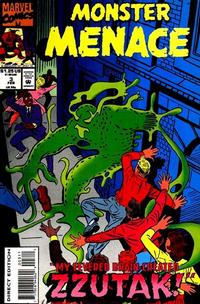 Job Number
T-565
Genre
fantasy-supernatural
Characters
Evil [The Monster from Bald Mountain] (see notes]
Synopsis
The animated statue rises up from where it fell in the last story and decides to go to America so that it can conquer the world. When it arrives it hides in a building that is actually a rocket that is shot into space.
Reprints
Keywords
monsters

Evil is not actually called Evil during the story, only called "The Monster from Bald Mountain" in a caption.

The Stooge (Table of Contents: 2)

Job Number
[B-796]
Genre
horror-suspense
Synopsis
A circus freak with six hands murders his fat lady wife because, even with six hands, he can't keep up with all the orders she gives him.
Reprints

Steve Ditko provides an illustration (smaller than 1/4 of the page) in response to a request to write about his work on the pre-hero monster comics.

Zzutak The Thing That Shouldn't Exist (Table of Contents: 4)

Job Number
[V-299]
Genre
fantasy-supernatural
Characters
Frank Johnson (introduction); Yucoya-Tzin (introduction, not named); Zzutak (introduction, origin); Zzutak's enemy (introduction, origin)
Synopsis
An American comic book artist is given magic paints which make whatever is painted with them real. He is compelled to go to Mexico and paint a monster as planned by the Aztec priest who gave him the paints. When he is ordered to paint more monsters, the artist uses his willpower to make his next monster fight the first, causing the temple to collapse on both monsters, giving the priest amnesia and ending his threat.
Reprints
Keywords
monsters