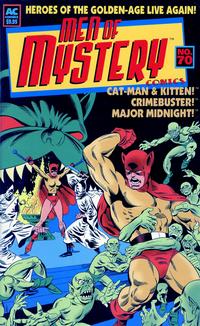 Men of Mystery (Table of Contents: 2)

Content by character names only and credits for the cover and editing of this issue.
The figure of The Zebra [John Doyle] with speech bubble is taken from page 4, panel 7 of his story from Green Hornet Comics (Harvey, 1942 series) #12 (April 1943).

The Eyes of Justice (Table of Contents: 3)

Captain Midnight relettered as "Major Midnight" in this story.

The Stamps that Spilled Blood (Table of Contents: 7)

Genre
superhero
Characters
Crimebuster; Iron Jaw; Squeeks; the Deadly Dozen; Sniffer
Synopsis
In order to get at wanted underground criminals, CB concocts a scheme to get Iron Jaw to join the Deadly Dozen, then have him resign to become a trusted Police officer, who will then lead the authorities to the Deadly Dozen and others wanted by the law.
Reprints

The Dartbane Horrors (Table of Contents: 10)

Genre
detective-mystery
Characters
Dr. Desmond Drew; Dawson; Billy Sikes (death); Warden Bleak (death); Josiah Sintern (in the body of Warden Bleak, death); Jaggers the Strangeer (in the body of Billy Sikes, death)
Synopsis
Something supernatural is going on at Dartbane Prison and Warden Bleak calls for Dr. Drew to help him get to the bottom of it. With Dawson's help Dr. Drew digs into the past of the prison to figure out what is really happening.
Reprints

Best of the West / promo (ad from the publisher) / 0.33 page (report information)

The Bandit Birds (Table of Contents: 13)

Genre
adventure
Characters
Lance O'Casey; Mike Bellew; Professor Damien
Synopsis
Lance and Mike take on an assignment to deliver a valuable satchel when that satchel is stolen at sea by a Condor the size of an elephant.
Reprints