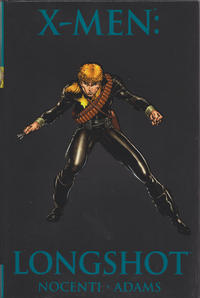 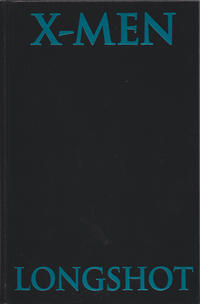 A Man Without A Past (Table of Contents: 3)

Genre
superhero
Characters
Longshot; Gog; Magog; Quark; Spiral
Synopsis
Running for his life, Longhsot leaps through a portal and arrives on earth with no memory of who he is or where he came from. As he tries to adjust to this strange new world, he is befriended by the dog looking creature, Magog, and the human survivalist nut, Eliot. Longshot and Eliot learn of a woman whose baby has been kidnapped and they decide to rescue her tot. They discover the band of creatures who chased Longshot from his world just as they are preparing to sacrifice the baby to open a portal home. Longshot uses his powers of incredible luck to rescue the baby and escape from Spiral.
Reprints

Genre
superhero
Characters
Longshot; Spiral; Gog; Mojo; J. Jonah Jameson; Spiral; Quark; Magog
Synopsis
Theo leaps from a bridge to his death. He lands on Longshot and tells Longshot his everyday including that Con Edison rips him off. Longshot decides to break into Con Ed and steal diamonds to pay Theo back. They make it into the power plant and the wires and machinery spark a few of Longshot's memories. They get the diamonds but are attacked by Spiral, Gog and their allies. The machinery gets destroyed and blacks out all of New York. Spiral opens a portal back to her home world. Magog reveals himself to be Longshot's enemy, intent on killing him. Jinx returns home, leaving Longshot alone.
Reprints
Keywords
Con Edison; diamonds; New York City

Genre
superhero
Characters
Longshot; She-Hulk; Magog; Mojo; Majordomo; Spiral; Spider-Man; Ricochet Rita; Butch; Darla; Alfie
Synopsis
Thanks to blacking out New York City and stealing diamonds, Longshot's picture is plastered all over the news. He befriends Butch, Darla and their gang of friends and gives them some of the diamonds. Running across She-Hulk and then Spider-Man, Longshot is attacked by both heroes. Longshot's powers allow him to escape and he reunites with the kids who are going on a monster hunt with a gun. Longshot touches the gun and it sparks more memories of his former life. Longshot and the gang track down the monster who turns out to be Magog. Mojo and Spiral teleport to Earth and arrive in Rita's home.
Reprints
Keywords
diamonds

Genre
superhero
Characters
Longshot; Magog; Mojo; Ricochet Rita; Spiral; Quark; Doctor Strange; Wong; Arize
Synopsis
Mojo and Spiral capture Rita to use her to locate Longshot. Longshot, the kids, and Quark battle the demonic Magog who has gorged himself on magic. Longshot discovers his powers are gone and quits the fight. Feeling sorry for himself, he gets another flash of his origin--he was created by Arize to be a deadly warrior for entertainment but was programmed with a penchant for rebellion. Longshot decides to visit Rita but finds her home destroyed and Dr. Strange there. They hunt down and battle Magog and are able to destroy the him. Longshot decides to take a proactive stance in fixing his life.
Reprints

Genre
superhero
Characters
Longshot; Mojo; Spiral; Ricochet Rita; Quark; Doctor Strange; Wong; Arize
Synopsis
Longshot, Dr. Strange and Quark find Rita has been turned into a hollow husk by Mojo. Mojo sets up a church on Earth and begins to brainwash followers. Longshot finds he cannot kill his former master, allowing him to escape. Longshot has another origin flash and realizes that his purpose is to free the slaves from servitude to Mojo. Longshot, Quark, Strange and Rita attack Mojo and Spiral. Dr. Strange opens a portal back to Mojoworld and the villain falls through. Longshot and Rita decide to follow and lead a rebellion of his people against Mojo and the spineless ones.
Reprints
Keywords
Church of Mojo; Mojoworld