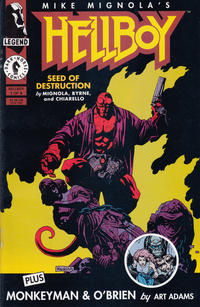 The inside front cover has logo, credits, indicia, and frontispiece.

Seed of Destruction [Chapter One] (Table of Contents: 2)

Mignola drew balloons and sound effects; Byrne lettered the dialogue with font based on his hand lettering. Neither is credited. // The Nazi officers are identified on the final story page, presented as a dossier on Project Ragna Rok. Manning's first name is revealed in a future storyline. Emma Cavendish's identity is revealed next issue. // Hellboy first appeared in a story in San Diego Comic-Con Comics (Dark Horse, 1992 series) #2 (August 1993), given away at the convention, and was seen in John Byrne's Next Men (Dark Horse, 1992 series) #21 (December 1993) as a fictional character a few months before this miniseries was released.

Who Are Monkeyman and O'Brien? [Chapter 1] (Table of Contents: 4)

Genre
science fiction; adventure
Characters
Axwell Tiberius [Monkeyman] (see Notes); Ann O'Brien; Akiko Oki (introduction); Oniko O'Brien (introduction)
Synopsis
The daughters of "famous inventor and adventurer" Prof. William S. O'Brien, Ann and Oniko, argue in an underground lab at the San Francisco estate of their missing father. When a program is accidentally activated that opens a rift between dimensions, a suited humanoid figure and a severed ape head hurtle through as the sisters are caught in a blast of strange energy.
Reprints

Monkeyman and O'Brien appear as a duo on the splash page only. Tiberius is not seen out of his suit until Chapter 2 and is named in Chapter 3. The characters' first published appearance, like Hellboy's, was in San Diego Comic-Con Comics (Dark Horse, 1992 series) #2 (August 1993), although the events of this story predate the duo's exploits in that issue.

Experience the Power of John Byrne's Next Men (Table of Contents: 5) (Expand) /

Next Men / promo (ad from the publisher) / 1 page (report information)