King, the Jack of All Trades (Table of Contents) 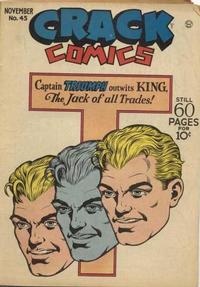 King, the Jack of All Trades (Table of Contents: 1)

While the art may be Bryant's, there are certain panels that look like Reed Crandall also may have had a hand in this story.

Basically the same story premise as the Beezy story in Crack Comics #37, with some identical situations.

[The Mustache Murder] (Table of Contents: 3)

[The Transformation of Mr. Crispin] (Table of Contents: 4)

[Pruning the Tree] (Table of Contents: 5)

First Line of Dialogue or Text
Like to see my new publicity photos, Pop?
Genre
humor
Characters
Molly the Model [Molly Maloney]; Pop Maloney
Synopsis
Pop is outraged at Molly's scanty attire in her photo portfolio, but he's the one who's arrested for indecent exposure after falling out of a window clad only in a towel.

First Line of Dialogue or Text
Fitz, old boy, when am I going to get a peek at your new model?
Genre
humor
Characters
Maloney; Fitz
Synopsis
Maloney gets all dressed up to see the "new model" his friend Fitz has at his house, thinking it's a sexy young woman. The model turns out to be a model ship.

First Line of Dialogue or Text
But Molly, ain't you a little old to model the illustrations for a bobby sox story?
Genre
humor
Characters
Molly the Model [Molly Maloney]; Pop Maloney; Jaxon Jitter
Synopsis
Molly gets worn out posing for a series of jitterbug photos.

First Line of Dialogue or Text
But if you dislike Diane so much, why do you spend three hours primping...
Genre
humor; teen
Characters
Kiki Kelly; Mrs. Kelly; Diane; Aighedd
Synopsis
Kiki gets dressed up to meet Diane's cousin, a "Hollywood scout." He turns out to be a Cub scout from Hollywood, Kansas.
Reprints

Cub Scouts were a junior version of the Boy Scouts of America.