First Line of Dialogue or Text
Death in the Garden of Evil! The Spectral Coachman.
Genre
horror-suspense
Reprints

Caption: “Death in the Garden of Evil!” moved and recoloured. Caption: “The Spectral Coachman” added. 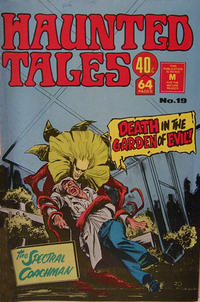 The Murderer (Table of Contents: 1)

We Challenge You to Read On! (Table of Contents: 2)

Introduction to the concept of ghosts. Job number (B-1004) deleted from this reprint.

The Spectral Coachman! (Table of Contents: 3)

Job Number
B-1003
Genre
horror-suspense
Characters
Johnny Cass; Rafe Brady
Synopsis
Tombstone, Arizona, draws its name from the town graveyard where the greatest badmen of the west are buried. But tonight - one of them lives again!
Reprints

Job number (J-2002), feature name “Cain’s Game Room” and first panel gag (a giant, who is tied up by little people, sees a chef with big knives coming for him) deleted from this reprint.
Two gag cartoons: A plane bombs the spotlights of a new supermarket. A organ grinder uses a large Frankenstein monster to collect money.

Ghost Cargo from the Sky (Table of Contents: 7)

The Legend of the Black Swan (Table of Contents: 9)

Genre
horror-suspense
Characters
Terwit; the kind man; Gustav; Frederick; mocking kids; townspeople
Synopsis
Terwit is dwarfish and is teased and ridiculed by the town's boys. Most adults do nothing to stop it. Terwit recluses himself in a clock tower and the clock from then on is stopped at midnight. Years later, many of those boys, now men, go to the tower to drive Terwit out and their screams cry out...Why?
Reprints