Part of the Knightquest The Search crossover story.
This issue has variants:

Quarry Part One of Three (Table of Contents) 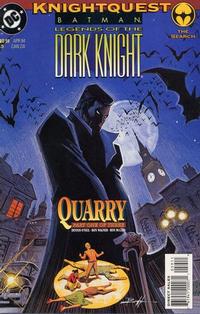 Quarry Part One (Table of Contents: 1)

The story is set in the current Batman/Azrael setting. Bruce Wayne has a broken back.