Sentry of the Skyways (Table of Contents) 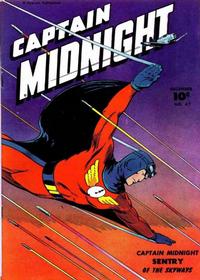 Fangs of the Werewolf! (Table of Contents: 2)

The last 1/3 of page 9 is titled "Capt. Midnight's Air Insignia", an on-going feature in Captain Midnight. This issue features the insigia for the 327th Fighter Squadron and the 669th Bombardment Squadron.

Features the insignia for the 327th Fighter Squadron and the 669th Bombardment Squadron.

Signs of the Times (Table of Contents: 6)

The Flying Dinosaur (Table of Contents: 12)