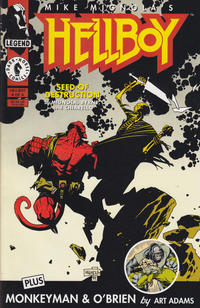 The inside front cover has logo, credits, indicia, an inset of Hellboy, and a recap of the story so far.

Mignola drew balloons and sound effects; Byrne lettered the dialogue with font based on his hand lettering. Neither is credited. // The overarching storyline continues in Hellboy: Wake the Devil (Dark Horse, 1996 series) #1 (June 1996).

Who Are Monkeyman and O'Brien? [Chapter] 4 (Table of Contents: 4)

A Madman Is Setting Fire to Los Angeles (Table of Contents: 5) (Expand) /

The Adventures of Hellboy Continue in Dark Horse Presents #88-91! (Table of Contents: 6) (Expand) /