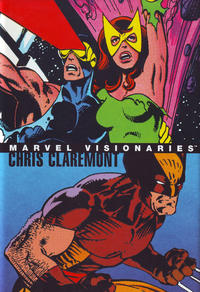 Where Stalks the Stilt-Man! (Table of Contents: 3)

Artie Simek is listed as colorist in the credits, instead of letterer.

The cover blurb on the initial printing of the cover was removed due to objections from Robert Heinlein. The blurb is restored on this printing.

Genre
martial arts; superhero
Characters
Iron Fist; Colleen Wing; Jeryn Hogarth; Sabretooth (villain, introduction); Steel Serpent [Davos] (villain, 1st in costume); Lei Kung, the Thunderer (cameo flashback)
Synopsis
Danny and Colleen arrive in the Canadian Rockies to act as bodyguards for lawyer Jeryn Hogarth but find that he has already been captured by Sabretooth and his men. Iron Fist defeats Sabretooth even though the villain has tricked him into looking into the rising sun and becoming snow blind.
Reprints

Sabretooth's name is spelled with a hyphen (Sabre-Tooth) in this story.

Phoenix Must Die! (Table of Contents: 13)

The Fate of the Phoenix! (Table of Contents: 14)

Genre
superhero
Characters
X-Men [Professor X; Cyclops; Phoenix [Jean Grey] (death; also as Marvel Girl and Dark Phoenix); Storm; Wolverine; Colossus; Nightcrawler]; Watcher; Recorder; Beast; Angel; Lilandra; Shi'ar; Kree; Skrulls; Supreme Intelligence; Gladiator; Imperial Guard [Starbolt; Oracle; Tempest; Nightside; Smasher; Warstar (1st); Earthquake (1st); Hussar (1st); Manta (1st)]
Synopsis
Lilandra transports the X-Men to her base so that Phoenix can be killed for her crime of wiping out an entire star system. Xavier explains that the Phoenix Force has been purged from Jean and demands the right to trial by combat when his captors refuse to listen. The X-Men and the Imperial Guard fight on the Blue Area of the Moon to determine Jean's fate. During the battle, Dark Phoenix manifests herself once again and Jean sacrifices herself rather than let the Phoenix loose on the universe.
Reprints
Keywords
Blue Area of the Moon; moon; trial by combat

As is now known, Phoenix and Jean Grey were never one and the same as revealed in Jean's resurrection in Avengers #263 and Fantastic Four #286. In the original story, Jean Grey didn't die and the story with the original ending is printed in Phoenix: The Untold Story #1

This cover may have been a last-minute replacement for one by Michael Golden. The Golden cover showed Rogue holding a defeated Thor and Iron Man above her head. The other Avengers are lying among debris on the ground. An image of Ms. Marvel partially covers the series title. Marvel editor-in-chief Jim Shooter's signature appears in a production box below the picture area on the original. In a November 23, 2011 comment on his website, Shooter wrote, "... at a glance, I'd guess that Golden's cover wasn't used because he didn't allow room for the contest banner at the top, which we were obligated to run. The cover that did run looks like it was cobbled together at the last minute. The Golden cover appears to have my signature on it, meaning I approved it. Maybe someone upstairs noticed that the contest banner was missing. But, I don't know for sure."

By Friends--Betrayed! (Table of Contents: 16)

Between AVENGERS #209 / 210; This story was supposed to follow the events in Ms. Marvel #25 but the book was cancelled with issue #23 and the story was finally printed in Marvel Super-Heroes #11 in 1992 and is the tale of how Rogue stole Ms. Marvel's powers.

And Now For Something Completely Different! (Table of Contents: 17)

Dave Cockrum reports 2006 that "I did loose pencils in blue. Editor Ann Nocenti referred to them as 'shakedowns'. But everything was there." Illyana's Fairy Tale is in X-Men Annual #8; Lockheed the Dragon (patterned after the X-Men's plane) pre-dates the 1st appearance of the real Lockheed. Nightcrawler travels to an alternate dimension inhabited by the characters in this fairy tale in Nightcrawler (Marvel, 1985 series) #3.

Warlock joins the New Mutants at the end of this story, and Doug Ramsey shortly after. Magneto's long-time base, Asteroid M, is destroyed in this story; it is rebuilt in X-Men (1991) #1.

Magneto next appears in Uncanny X-Men #188. The New Mutants appear next in New Mutants Annual #1.

Story has versions of the X-Men as all women, manga robots, s&m freaks and funny animals; Continued in Excalibur: Mojo Mayhem (Marvel, 1989 series) #1.

The Cross-Time Caper (Table of Contents: 32)

Source for letters credit is The Official Marvel Index to the X-Men (Ward 1994).

Wolverine tells Captain America that he will have to decline making Cap his sidekick.