The Contest Begins! (Table of Contents) 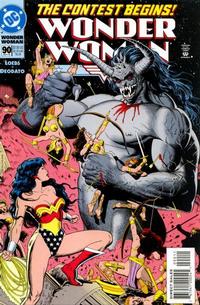 There is a suggestion that Antiope's Amazons split from Hippolyte's tribe on Paradise Island, not back in Greece, as was detailed in Wonder Woman (DC, 1987 series) #1.

Diana's Golden Age best friend Mala made her first post-Crisis appearance in a dream sequence in Wonder Woman Annual (DC, 1988 series) #3, but here, she appears in the flesh.