The Beginning of Tomorrow! (Table of Contents) 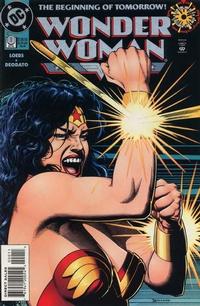 The Contest, Part 2: The Blind Eyes of Time (Table of Contents: 1)

Genre
superhero
Characters
Queen Hippolyta; Wonder Woman [Princess Diana]; Mala; Artemis; Amazons of Bana-Mighdall [Mala; Trigona]
Synopsis
Diana visits the village of the Bana-Mighdall Amazons, where she not only resembles their ancestress, Antiope, but -- in a hallucination set in the past -- she becomes her.
Reprints

As a Zero Hour issue, Wonder Woman's origin in this issue has discrepancies from Wonder Woman (DC, 1987 series) #1. Here, it is Steve Trevor crashing on Themyscira which instigates the contest, whereas in WW #1, Diana already won the contest when he arrives. Additionally, Diana wears the "Mask of Proteus" to disguise her identity during the contest.

Mala notes that Diana's "goddess-given powers did not manifest on Themyscira."