Batman is wearing a gun. 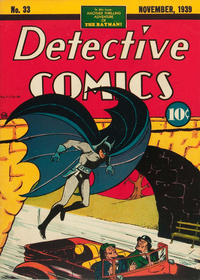 The Batman Wars against the Dirigible of Doom (Table of Contents: 2)

Contains a 2-page origin sequence, the 'original' origin, written by Bill Finger (credit from Craig Delich and Martin O'Hearn). The art for the origin sequence is inspired by Bill Vallely's art in Gang Busters In Action and Junior G-Men and the Counterfeiters as well as Hal Foster's in Tarzan for the last panel.

The Batman carries and uses a gun in this story.

Mine of Mystery (Table of Contents: 6)

The Northwoods Mystery (Table of Contents: 10)

[The Sewer Robberies] (Table of Contents: 11)