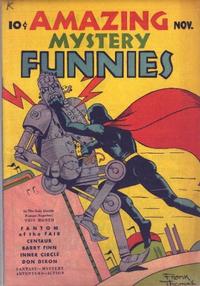 First Line of Dialogue or Text
Catastrophe strikes at the electrical utilities area of the World's Fair.
Genre
superhero
Characters
The Fantom of the Fair; Mike (a Policeman); The Thunderbolt (villain, robot, death?); "The Brain of the Robot" (villain)
Synopsis
In the Electric Utilities area of the World's Fair, a giant electro-robot goes on a rampage, turned loose by some unknown person, threatening the lives of Fair goers with a million volts of electricity at its fingertips. The Fantom battles the metal menace until he discovers the brains behind the controls, then deals with him.
Reprints

First Line of Dialogue or Text
London. In the early morning...
Characters
The Inner Circle [Major Paul Ramsay; George Selkirk]; Sir Edmonton (Secretary of the Exchequer); The Blue Robins [Mr. Breton (leader); Doc; Monk; Murphy] (villains)
Synopsis
Major Ramsay and George Selkirk infiltrate the nefarious Blue Robins in order to get information as to the group's activities and to stop their bombings of important British districts, and to prevent the kidnapping of Sir Edmonton.
Keywords
Breton Castle; The Blue Robins

Next issue begins "The War of the Marshland".

Script credit revised from Kildale to ? by Craig Delich.