Flip book
This issue has variants: 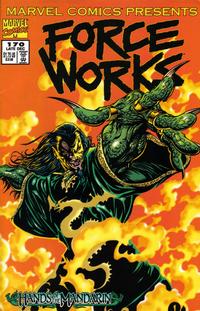 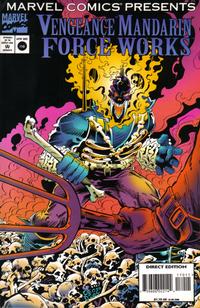 Title, credits, issue checklist for Hands of the Mandarin, and indicia. Inside covers.

In the Hands of the Mandarin, Part 2 of 2: Inner Demons (Table of Contents: 3)

First Line of Dialogue or Text
You're currently inside the mind of the Mandarin...
Genre
superhero
Characters
Mandarin
Reprints
Keywords
China; Heart of Darkness; Mandarin's Rings

Part of the Hands of Mandarin crossover. The story continues in Force Works (Marvel,1994 series) #6.

Part of the Hands of Mandarin crossover.

Part 1: Shrinking to Nothing (Table of Contents: 5)

From Richard and Michael (Table of Contents: 7)

First Line of Dialogue or Text
Rumors, we hear lots and lots of rumors, these days with electronic bulletin boards and the connectedness of the internet, these rumors can spread as fast as it takes someone to type them onto a keyboard.

Text about the cancellation of the series.