Many copies of this issue shipped with a printing error duplicating some pages and thus omitting others.

J. Bone confirmed on 2009 April 27 that he colors his covers to this series. The Super Friends all wear versions of Batman's costume on this cover. 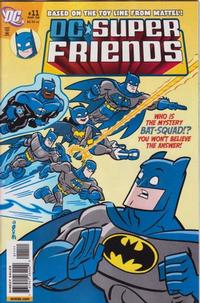 Story is broken into three chapters. // Quisp, Mopee, and Shaggy are not named in the story, but along with the silent Guardian of the Universe are referred to as the other Super Friends' "imps". They appear in their traditional (if fairly obscure) forms save for insignia on their clothes associating them with their respective Super Friends.

Genre
superhero
Characters
Batman; The Flash (costume details only)
Synopsis
Batman instructs readers on how to use the provided mask and insignia to dress as The Flash.

Make Your Own Dancing Puppets! (Table of Contents: 5)

Genre
superhero
Characters
Aquaman; Bat-Mite (image only); Mr. Mxyzptlk (image only)
Synopsis
Aquaman instructs readers on how to cut out and assemble "dancing puppets" of the imps.