This issue is Green Shield Continuity #13, and went on sale on time. It also features the "Origins & Omens" promotion on the cover for April 2009 titles.
This issue has variants:

Out of the Phantom Zone! (Table of Contents) 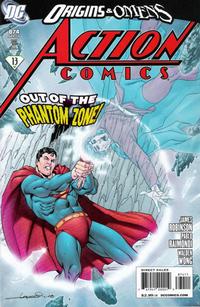 Genre
superhero
Characters
Superman; General Zod; Non; Ursa; Alura; General Sam Lane; Lex Luthor; Jimmy Olsen; Steve Lombard; Lois Lane; Nightwing [Chris Kent] (cameo); Flamebird [Thara Ak-Var] (cameo); Mon-El; Kryptonians
Synopsis
On New Krypton, Superman attacks Zod, but is subdued by his soldiers. Zod tells Superman that his motives have changed, now that he has fellow Kryptonians on New Krypton. Alura invites Superman to renounce Earth and stay on New Krypton. Superman says he'll think about it. And he does, taking Lois to the Fortress, pondering what Zod is up to. While there, he hears Mon-El pleading from the Phantom Zone, as it is collapsing around him. He pleads for Superman to release him, knowing that he'll die from lead poisoning if released. Superman reluctantly releases him.
Reprints
Keywords
Headship; Kandor; New Krypton; Phantom Zone

Genre
superhero
Characters
The Guardian [Jim Harper clone]; Scar of Oa; Science Police [Markham; Pollock; Wilcox]; The Guardian [Jim Harper] (flashback, cameo); Gwendoline Harper; Tellus (cameo); Nightwing [Chris Kent] (cameo); Flamebird [Thara Ak-Var] (cameo)
Synopsis
Former Guardian Scar is observing the Guardian (Jim Harper's clone), as he warns the Science Police that Toyman always has a surprise for Metropolis on his birthday, even when in prison. Sure enough, miniature P38 Lightnings start strafing the city, and a giant teddy bear is firing explosive blasts. The team deals with the threats, as Harper reminisces. Scar then peeks into Harper's future, seeing his fears realized and other emotions with the situations to come.
Reprints