This issue is Green Shield Continuity #21, and went on sale on time. It also features "World Without [S-shield]" promotion on the cover.
This issue has variants: 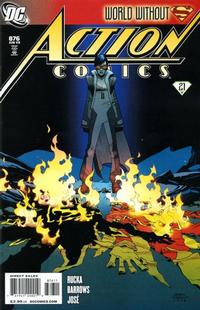 The Sleepers Part 2 (Table of Contents: 1)

Genre
superhero
Characters
Nightwing [Chris Kent]; Flamebird [Thara Ak-Var]; Ursa; Lois Lane; Jimmy Olsen
Synopsis
Ursa has tracked down Nightwing and Flamebird to Superman's fortress and attacks them, taunting them all the while. She almost kills Flamebird, but Nightwing turns the tables and could kill her with a kryptonite knife, but refuses as Superman would not do that. He leaves her virtually blinded in the fortress, which she accidentally brings down on herself as Nightwing takes Flamebird to Metropolis to his adopted mother Lois Lane.
Keywords
Fortress of Solitude