Per indicia: Copyright 1995 Michael Mignola. Printed in Canada. "Special thanks to John Byrne." // Month of release from Dark Horse website.

This is the fifth Hellboy comic book, after the four-issue series Hellboy: Seed of Destruction (Dark Horse, 1994 series). As of this issue, gray issue numbers appear on the inside front cover of every "definitive" Hellboy comic book next to the logo, continuing the numbering from Seed of Destruction, despite each one-shot and limited series having its own unique indicia title and issue numbers. Next is Hellboy: The Corpse and the Iron Shoes (Dark Horse, 1996 series).

The Wolves of Saint August (Table of Contents) 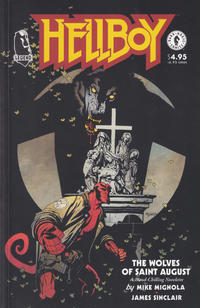 The inside front cover has logo and credits against unknown vintage art.

The Wolves of Saint August (Table of Contents: 2)

Mignola hand-drew some display lettering and balloons. Story is printed in color for the first time with "eight new pages and some odd panels to smooth out some of the rough spots" per Mignola's notes.

Mignola offers notes on the story and covers.

When Strangeness Threatens to Engulf the World, A Strange Man Will Come to Save It (Table of Contents: 9) (Expand) /

The inside back cover has company masthead and indicia.

The back cover has a panel reproduction against an image of Hellboy.