Tarzan and the Fires of Tohr (Table of Contents) 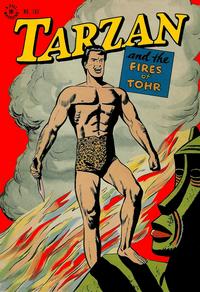 inside front cover; black, red, and white. Text and illustrations.

Tarzan and the Fires of Tohr (Table of Contents: 2)

Genre
jungle
Characters
Tarzan [John Clayton]; Paul D'Arnot; James Barton; Ruth Barton; Queen Ahtea; Mungo; Ukah
Synopsis
Tarzan and his friend Paul D'Arnot find Professor James Barton and his daughter Ruth alone in the jungle after their bearers had deserted them. The quartet is attacked by hostile natives and have to flee by canoe. A swift and unexplored river sends the canoe through a long rock tunnel and when they emerge they find themselves in the land of Queen Ahtea and the lost city of Tohr. The Queen decides that Tarzan would make a good husband and King. When Tarzan does not agree with her plans, he and his friends must escape from the Queen's dungeons.
Reprints

Tarzan and the Black Panther (Table of Contents: 3)

Inside back cover; black, red, and white. Text and illustrations.