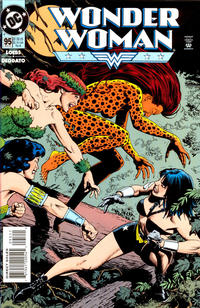 Although Artemis was granted two gauntlets of Atlas in Wonder Woman (DC, 1987 series) #93, she wears only one this issue, and from now on. Although it increases the wearer's strength by ten, Artemis winces when she punches the Chauvinist using the arm not wearing the gauntlet.

Julianna Sazia explains she had chains welded to Diana's bracelets by men, assuring her accomplices this will sap her strength, which of course, post-Crisis, is no longer true, which Diana demonstrates.