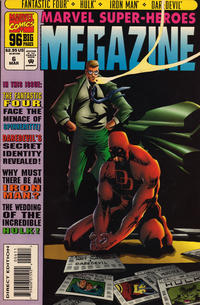 The Eyes Have It (Table of Contents: 1)

Why Must There Be an Iron Man? (Table of Contents: 3)

Member of the Wedding (Table of Contents: 4)

According to an announcement by editor Tom Brevoort on the letters page' this pin-up "would have been the cover to our next issue", which was not published. Since the existing six issues had been reprinting John Byrne's Incredible Hulk issues in sequence (#'s 314 to 319) and the letters' page in issue #4 of this series noted that "John Byrne's run on [Incredible Hulk] will come to an end with MSHM #7", the next issue might have reprinted the story from issue #320(June, 1986) which was not by Byrne and did not contain a character resembling the second figure in the pin-up; or it might have reprinted the story originally intended for #320 but eventually printed in Marvel Fanfare #29 (November, 1986), which contained the villains Hammer and Anvil. Since the second figure bears a striking resemblance to Hammer, it is more likely that Wrightson drew a cover intending to reflect that story. That is not, however, confirmed by Brevoort's note.