Scripter Gardner Fox reports writing this story originally for All-Star #36. Solomon Grundy's first post-1940's appearance will be in Showcase #55 (March-April 1965), also written by Fox, and it's 2nd page is a Murphy Anderson re-drawing of Hasen's Page B from this issue. That story picks up right where this story leaves off, ignoring Grundy's appearance in Comic Cavalcade #24. Roy Thomas later reconciles these two conflicting accounts in All-Star Squadron #3 (November 1981).

We formerly credited in error Gaspar Saladino (who was in service at the time) with the letters on the main story.

The Revenge of Solomon Grundy! (Table of Contents) 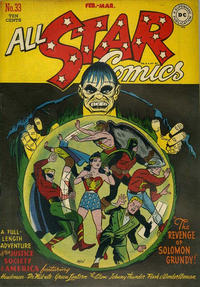 The Revenge of Solomon Grundy! [Introduction] (Table of Contents: 3)

Job Number
AS 33
Genre
superhero
Characters
Justice Society of America [Hawkman [Carter Hall]; The Flash [Jay Garrick]; Johnny Thunder; Dr. Mid-Nite [Dr. Charles McNider]; Wonder Woman (Diana Prince]; The Atom [Al Pratt]; Green Lantern [Alan Scott]]; Solomon Grundy [Cyrus Gold] (villain, origin recap)
Synopsis
Solomon Grundy's origin is re-told and he is imprisoned in an energy bubble by G.L., but shattered by lightning. His only thought is to find G.L. and kill him. Meanwhile, at JSA HQ, the Lantern stands alone and hears a knock on the door, opens it and explains, "You!" Much later, the other JSA members arrive and discover the HQ ripped apart, with a large muddy footprint on the floor. Johnny turns on the radio, which reports Solomon Grundy is on the loose, seen at various towns. The JSA puts the pieces together, and, leaving Wonder Woman behind to gather news, the rest leave to find Grundy.
Reprints
Keywords
Alcona; Carver; Dander; energy bubble; Harford; Lynnville; New York City; Power Ring

For the first time, Wonder Woman is not listed as "Secretary," though she plays no part in the final battle, but joins the guys "sometime later." The opening segment recounts Grundy's origin from All-American Comics #61 (October 1944).

[The Revenge of Solomon Grundy! Chapter 1] (Table of Contents: 5)

Genre
superhero
Characters
Hawkman [Carter Hall]; Eddie Marks (Regis Herald's editor); Eddie's unnamed father (competing newspaper editor); unnamed newspaper typesetter; Solomon Grundy [Cyrus Gold] (villain)
Synopsis
While Hawkman briefly visits Harford and discovers Grundy is heading toward Regis, the editor of Regis' newspaper is fuming with his Dad over how he runs the Herald. His father doesn't condone his son's scandal sheet, but as they argue, Grundy smashes his way in, looking for G.L., and, as he tears the place apart, Hawkman arrives. Announcing he is a friend of G.L., Grundy vows to kill the Hawk as well. After knocking Hawkman out, Grundy storms away. When the Feathered Fury revives, father and son make peace, vowing to unite their papers and work together, and Hawk leaves to locate Grundy.
Reprints
Keywords
Harford; Regis; The Regis Herald

[The Revenge of Solomon Grundy! Chapter 2] (Table of Contents: 6)

Genre
superhero
Characters
Dr. Mid-Nite [Dr. Charles McNider]; Jimmy Chase; unnamed housekeeper for the Chases; Solomon Grundy [Cyrus Gold] (villain); unnamed maid for the Chase Mansion (villain); Joe (villain)
Synopsis
When Jimmy leaves the house to play marbles with his friends, the maid signals to her cohort to enter the mansion so they can rob the safe while the parents are away. While they do this, Jimmy and his friends encounter Grundy, who tries to play marbles, but crushes them...and the kids scatter. Mid-Nite gets a tip on Grundy's location and follows footprints to the mansion and catch the crooks in action, and mops them up as Grundy enters. In danger, Mid-Nite hurls a blackout bomb, which disorients Grundy, who then storms out. Mid-Nite leaves Jimmy to call Police, then trails Grundy again.
Reprints
Keywords
Blackout Bomb; Carver; Chase Mansion

[The Revenge of Solomon Grundy! Chapter 3] (Table of Contents: 7)

Job Number
AS 33
Genre
humor; superhero
Characters
Johnny Thunder; The Thunderbolt [Archibald]; Solomon Grundy [Cyrus Gold] (villain); two unnamed girls (villains); three unnamed crooks [one disguised as a phony Grundy] (villains)
Synopsis
Three thugs in Zenith get Grundy to break into a business for them, while Johnny is being mid-led to Grundy's true location by girls in cahoots with the thugs. But Johnny remembers where he is to go and arrives in Zenith as Grundy and thugs walk out he door. Grundy knocks Johnny out and then leaves. When Johnny awakes, the girls lead him to a cereal factory, and he attacks a phony Grundy and thugs walking out the door. Johnny attacks, knocks Grundy down and pulls his legs (actually stilts) off. The Thunderbolt appears, knocks out the thugs, and offers to help Johnny find the true Grundy.
Reprints
Keywords
Dander; Meridien; Radio Records; Say You; See-All Travel Agency; Sweeties Cereal Factory; Zenith

The true name of Johnny's Thunderbolt was revealed in Flash Comics #69 (and his wife's name, Mildred, was also revealed in that issue).

[The Revenge of Solomon Grundy! Chapter 4] (Table of Contents: 8)

This is Naydel's last work on the JSA.

[The Revenge of Solomon Grundy! Chapter 5] (Table of Contents: 9)

Genre
superhero
Characters
The Atom [Al Pratt]; Solomon Grundy [Cyrus Gold] (villain); Baldy Balsom (villain); Baldy's gang (villains)
Synopsis
In Lambert City, Baldy Balsom convinces his thug buddies that he not washed up and he'll commit any crime he wants without anyone stopping him. They believe it when Grundy walks in the door, and he agrees to help Baldy if he will tell him how to find Green Lantern. While Grundy is committing three crimes, the Atom gains a clue to the monster's location, and arrives at a shoe factory and stops Baldy and his men. Then Grundy knocks the Atom unconscious, senses he will get no information from Baldy, and leaves. Atom takes the crooks to jail, the sets out after the Marshland Monster again.
Reprints
Keywords
Lambert City; Lambert City Bank; Lambert City Show Factory; Lynneville

[The Revenge of Solomon Grundy! Chapter 6] (Table of Contents: 10)

Job Number
AS 33
Genre
superhero
Characters
Green Lantern [Alan Scott]; Doiby Dickles; Solomon Grundy [Cyrus Gold] (villain)
Synopsis
The scene shifts back to the moment at JSA HQ where Green Lantern had opened the door in response to a knock, and said, "You!" To his surprise, Doiby Dickles walks in, and informs G.L. that Grundy has freed himself and is on the loose. G.L. and Doiby smash out the window to track down Grundy and Grundy arrives there soon after, tearing the place up. The Lantern then uses a modified radio attuned to track down Grundy, and locates him in State Park. As the two battle, G.L. is dazed and goes over a waterfall, where Grundy holds his head underwater, hoping to drown him.
Reprints
Keywords
New York City; Power Ring; State Park

This is Doiby Dickle's first appearance in All-Star since issue #7.

[The Revenge of Solomon Grundy! Conclusion] (Table of Contents: 11)

Genre
superhero
Characters
Justice Society of America [Green Lantern [Alan Scott]; Hawkman [Carter Hall]; The Atom [Al Pratt]; Dr. Mid-Nite [Dr. Charles McNider]; Johnny Thunder; The Flash [Jay Garrick]; Wonder Woman [Diana Prince] (cameo)]; Solomon Grundy [Cyrus Gold] (villain)
Synopsis
The JSA arrive in time to rescue Green Lantern and battle the Marshland Monster, eventually, by sheer numbers, holding him down in water. As darkness sets in, Johnny looks at the Moon, musing what "the man in the Moon" would do with Grundy. So, Green Lantern puts Grundy back into a green bubble formed by his ring and personally transports Grundy to the Moon's surface. Later, as the members look up at the glowing orb in the sky, they wonder if even the Moon can hold Grundy?
Reprints
Keywords
energy bubble; Mace; New York City; Power Ring; State Park

First Line of Dialogue or Text
Looks like the kid is in the big money!
Genre
humor

4 gags. This filler does NOT appear in the Archives. Writer verification and letterer credit by Craig Delich.

This text story does NOT appear in the Archives.

Upset Over a Sonnet (Table of Contents: 15)

This story does NOT appear in the Archives.