On sale date from the publication date and volume number found in the Catalog of Copyright Entries, Part 2, Periodicals, New Series, Volume 34, 1939, Number 4. Class B periodical. Copyright number B 435648. 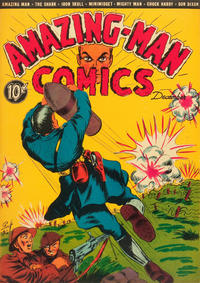 A questionnaire for readers to fill out about what they expect to get for Christmas.

Special Offers for Boys and Girls (Table of Contents: 2)

Inside front cover. Shares page with the questionnaire.

First Line of Dialogue or Text
In Tibet, 25 years ago, the Council of Seven selected an orphan...
Genre
superhero; war
Characters
Amazing-Man [John Aman]; Pierre (French soldier); the Nazis (villains, many die)
Synopsis
Learning about war being declared in Europe, the Amazing Man changes into the Green Mist, heads for the airport, and takes his fighter plane across the Atlantic to fight German planes in France. Involved in a aerial dogfight, Aman is shot down and captured by the Germans, who send him to Concentration Camp 23365AC.
Reprints
Keywords
concentration camp; France; Germany; howitzer; Lewis .30 Caliber Aircraft Machine Gun

The Return of the Cat Man (Table of Contents: 4)

Title and credits from Lou Mougin, May 2009.

Title from Lou Mougin, May 2009.
Hughes is credited as artist on this feature by Jerry Bails' Who's Who.

Title and character info from Lou Mougin, May 2009.
Burgos is credited as writer and artist on this feature by Jerry Bails' Who's Who.

Title and credits from Lou Mougin, May 2009.
Guinta and Mirando are both credited on art on this feature by Jerry Bails' Who's Who.

Later known as Minimidget. Title from Lou Mougin, May 2009.
Originally only credited as writer, but John Kolb is credited only on art by Jerry Bails' Who's Who.

Genre
western-frontier
Characters
Drake Hanley; Sheriff Carey Phelan
Synopsis
Even in the deep mesa, the hand can be faster than the eye.

Sequence info from Lou Mougin, May 2009.

First Line of Dialogue or Text
Oxan, there seems to be much gaiety in the courtyard!
Genre
science fiction
Characters
Chuck Hardy; Oxan; Jerry Peterson; King Kustan; Princess Istrid; Leer; Kolo (Istrid's lizard); two-headed Reptilis
Synopsis
Chuck and his friends are starting on an expedition with Leer as guide, and he is ordered by Princess Istrid to kill them on the way.
Keywords
Aquatania; Roara; steam-rifle

Title from Lou Mougin, May 2009.
Thomas is credited on both script and art by Jerry Bails' Who's Who.

The Football Mystery (Table of Contents: 11)

Genre
sports; superhero
Characters
Mighty Man (12 foot giant)
Synopsis
Mighty Man plays football against a team of men who have been operated on to obey the will of a mad scientist.
Keywords
Denver; football; steel vault

Title and script credit from Lou Mougin, May 2009.

Presumably Frank Filchock was the younger brother (?--possibly cousin) of Martin Filchock (Frank born in 1916, Martin in 1912, both in Pennsylvania, USA). Frank Filchock was a professional football player in the United States, but was suspended by the National Football League in 1947 after becoming involved in a cheating scandal (his suspension was reversed in 1950). Filchock spent most of the rest of career as a player and coach in Canada.

First Line of Dialogue or Text
On the outskirts of a fishing town, trouble's afoot...
Genre
superhero
Characters
The Shark; Kirk (fisherman); Johnny (gang chauffeur); The Fishermen Gang (gangsters); Phil Davis (fisherman, dies)
Synopsis
The Shark is an amazing under-sea creature serving justice, has webbed hands and feet, and the son of a mermaid and Neptune.
Keywords
television

Title from Lou Mougin, May 2009.
Glanzman is credited on both script and art by Jerry Bails' Who's Who.