The First Man to Reach Mars! (Table of Contents) 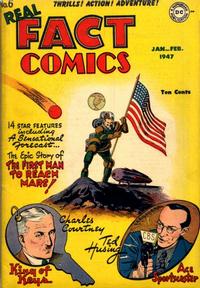 King of Keys (Table of Contents: 3)

Columbus of Space (Table of Contents: 4)

Genre
science fiction
Characters
Col. Tommy Tomorrow (introduction)
Synopsis
Tommy Tomorrow applies at Rocket College in 1954. He learns rocket engineering and masters astronomy. Upon graduation, because he has the highest grades of his class, the Army chooses him for "Operation Mars". After another year of training, in August 1960, Col. Tomorrow blasts off for Mars. Days later he arrives at his destination. He plants an American flag, becoming the first man ever to set foot on another world.
Reprints
Keywords
Mars; Operation Mars; Rocket College

This is the first appearance of Tommy Tomorrow.

Script information is from Gene Reed (entered by Per Sandell).

Once in a Lifetime / comic story / 2 pages (report information)

The Father of the Submarine (Table of Contents: 13)

This article has several features. John Daly apparently is involved with several if not all of the features.

Genie of the Bottle (Table of Contents: 17)

A letter from future science fiction writer Harlan Ellison (as a child) is published. It is his first published writing; albeit one sentence ("My parents welcome REAL FACT COMICS as wholeheartedly as I do.")