On sale date from the publication date and volume number found in the Catalog of Copyright Entries, Part 2, Periodicals, New Series, Volume 34, 1939, Number 4. Class B periodical. Copyright number B 435264.

Genre
superhero
Characters
Superman
Synopsis
Superman rips the barrel from a mounted cannon, while a bi-plane seems to be heading towards him.
Reprints
Keywords
artillery

Previous art credit given to Joe Shuster, but both Superman pose and inks look more like Boring.

The scene depicted is rather anachronistic. Although Superman never personally got involved in fighting on the European front (except for the famous, non-canonical, short story where he ends the war in a matter of hours by bringing Hitler and Mussolini to justice), the bi-plane, the mounted cannon, and the barbed wire on the hill suggests a first world war setting. 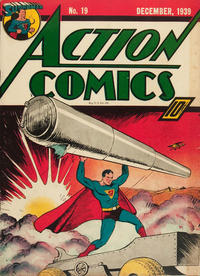 [The Purple Plague] (Table of Contents: 2)

First Line of Dialogue or Text
An ambulance is wanted at 211 Terrace Avenue...
Genre
superhero
Characters
Superman [Clark Kent]; Dr. Travers; Ultra-Humanite (villain)
Synopsis
A purple plaque sweeps Metropolis killing citizens left and right. Only Dr. Travers has discovered an antidote, and Superman must stop the Ultra-Humanite from killing the good doctor and prevent that cure from being used.
Reprints

Pencils previously credited to Joe Shuster, but the layouts and unusual Superman flying poses are typical Cassidy. He claimed that Siegel and Shuster allowed both himself and Wayne Boring a free hand in how they depicted a script, with no interference from either creator.

Superman's Special Monthly Message to the Supermen of America! (Table of Contents: 4) (Expand) /

[The Train Robbery] (Table of Contents: 5)

Genre
adventure
Characters
Pep Morgan; his father; his mother
Synopsis
Driving towards his home place, Pep spots an iron bar across the railroad tracks. When lifting it off a gang of thugs appear and knock him out. The oncoming train stops for the obstruction and the crooks attempt a robbery, which is foiled by Pep, but they all get on the train as it pulls away. Pep alerts the station man by note as they pass through the next small stop, and the police are waiting at Green City. While visiting his folks, pals of three criminals recently arrested by Pep kidnap him, but he is recognized by a traffic cop who knows him, which allows Pep to overpower his kidnappers

[The Boot Thieves] (Table of Contents: 6)

Genre
adventure; western-frontier
Characters
Chuck Dawson
Synopsis
Chuck is robbed of his boots and the outlaw throws him a brand new pair as replacements. Riding into a nearby town, a storekeeper identifies him as one of the men who robbed him, by the boots that were stolen. Chuck disarms both sheriff and deputy and rides off to capture the real robbers.

First Line of Dialogue or Text
"Africa" the dark continent...
Genre
adventure
Characters
Clip Carson; Colton
Synopsis
In Kenye [sic] Clip is approached by Colton, a dealer in ivory, whose shipments have failed to get to the coast. Notorious bandit "Wolf" Lupo has been identified as the leader of the raiders. Daredevil adventurer that he is, Clip agrees to head up the next safari of ivory. An attempt is made on Clip's life, but he manages to shoot the cobra. The safari is later surrounded by cannibals, but Clip has thoughtfully packed a bag with harmonicas, and distributes them to the natives, who are entranced by the music.

Genre
adventure
Characters
Tex Thomson; Bob Daley; John Barryless; Gargantua
Synopsis
Famous actor John Barryless asks Tex to find his son Bart, who has disappeared in the Sudan. Tex and Bob sail for north Africa and when they reach the place he was last seen, find a note which reads, "I am being attacked by zombies Bar---". Pushing into the interior they fall into a pit where they find Bart. The chief of the natives has been injecting a chemical into captives which saps their will and gives the appearance of being a zombie. Tex, Bob and Bart are about to be injected...

The Gorilla King (Table of Contents: 18)