Ghost of Blasco (Table of Contents) 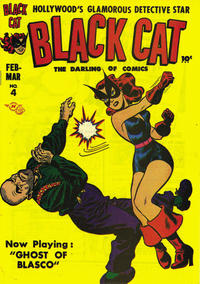 Ghost of Blasco (Table of Contents: 1)

The Imitation Atlas (Table of Contents: 2)

The Boulevard of Horror (Table of Contents: 4)

The Strange Case of the Sidewalk Fisherman (Table of Contents: 6)

Genre
adventure; superhero
Characters
The Red Demon [Judge Straight] [aka Reginald Hawkins, butler to Judge Straight] (introduction); James Jenkins (introduction); Imp (villain, imitator, introduction); The Boss [Marline] (villain, a magician, introduction, death)
Synopsis
James Jenkins is rounded up by the Demon and tried for robbery as a society thug. Then he has second thoughts and decides to portray his own butler and seek out information as the Servant's Club. But he is captured and held prisoner by The Boss and her lacky, Imp.
Reprints
Keywords
Servants Club

First appearance. However, his origin was not told until Black Cat #6 (June-July, 1947).

It is likely that this story and the story in issue #6 were printed out of order as #6 has the origin and no one even knew of him at that time like they do here in issue #4.

Script credit added by Craig Delich, per The Who's Who, which indicates that Carlin was the only writer for the strip. No extant evidence disputes this.

First Line of Dialogue or Text
Don't be scared -- all he's got is a left to the jaw!
Genre
humor

First Line of Dialogue or Text
What time does the next train leave for Paris?
Genre
humor